Last Tuesday (July 27-th), Oracle released MySQL 8.0.7 following the three months release cycle introduced last year with 8 series. This is the next "maintenance" release introducing a few new features as well as depreciating some non-standard ones, so here are my picks starting with the ones I consider important for developers.

With the help of generated columns (introduced with MySQL 5.7.6) and functional indexes (introduced with MySQL 8.0.13 for which I wrote before) it become possible to index data in complex column values like JSON. But in JSON you could have scalars as well as arrays, so searching into arrays with the help of an index wasn't possible. Multi-valued indexes come to solve this by allowing multiple records in the index to point to the same data record. Such indexes are created like any other functional index and used automatically by the optimizer when possible. Let's see an example - a register for translators with their spoken languages.


Then, let's query the translators that speak English using the new MEMBER OF operator:


Both queries are leading to the same result:


Given the data as expected the queries return T1 and T2, but not T3. However, these queries are doing a full table scan, so their performance would degrade with the accumulation of data in the table.

Fortunately, it's now possible to add a multi-valued index like this:


It's a functional index into which it's necessary to use function CAST with the new ARRAY keyword. With the index the execution plan of the SELECT queries above become respectively: 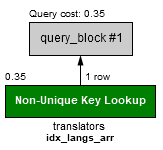 It's slightly different for arrays of objects, but only for the JSONPath expression. Let's create some data (after cleaning Case 1):


Then, let's query the translators that speak English the same two ways:


Just like in the first case the queries use full table scan, which could now easily be changed by adding a multi-valued index like this:


Notice the slightly different syntax of the JSONPath expression. For the index to work it's of course necessary to use the same expression in WHERE clause as in the index definition. Developers that prefer to keep data directly into JSON columns should be happy by this new feature, as it makes it possible to index not only scalar variables, but also arrays.

Apart from the already mentioned new standard operator MEMBER OF for searching values in JSON arrays there are three new functions JSON_OVERLAPS, JSON_SCHEMA_VALID and JSON_SCHEMA_VALIDATION_REPORT.

Cast to FLOAT, DOUBLE and REAL

Functions CAST and CONVERT now could cast to floating point data types such as FLOAT, DOUBLE and REAL. Let's try it with an incorrect value:


There are two warnings, so let's see them with show warnings:


Casting to DOUBLE and REAL produced different result and the same warnings:

For many years MySQL administrators had to dump masters, transfer the dump over network and load it into replicas in order to initialize their state (see Copy a Database from one Server to Another). I'm not that much into database administration, but it was cumbersome and annoying procedure especially in case of unrecoverable replication errors where I had to re-initialize the state of replicas, so I considered it a burden. Why I could not just "clone" the master after wiping the replica? Well, the new version makes it possible to easily create new instances or re-initialize existing by implementing native provisioning into the server with the CLONE command. It's made possible by the new MySQL Clone Plugin. You could find more about this by reading the following articles:
It's the focus of this release and I'm sure it's going to be a game changer for organizations using extensively MySQL replication.

This is a list of features that are depreciated with this release and would be removed in future releases:
Developers should consider getting rid of these nonstandard features to avoid unpleasant surprises in future. I'll personally review my projects and correct as soon as possible.

In regards to CHECK constraints I found two bugs in the prevoius release and one of them was fixed (see bug #95189 CHECK constraint comparing columns is not always enforced with UPDATE queries). For the full example please, see bug_95189_test_case.sql script, so let's just verify it:

So it's fixed, because as expected the UPDATE query fails even with the specific binlog settings. The other one (see bug #95192 CHECK constraint comparing column with default value is not enforced) would have to wait.

That wraps up my review of new features in MySQL 8.0.17 maintenance release. I hope new releases bring more features for developers.