Today me and my wife succeded to make the first picture of Gabriella. 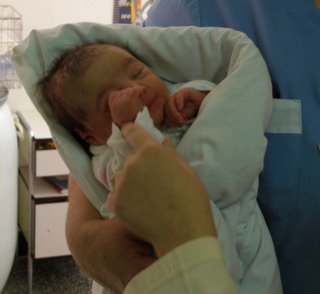 This one was shoted by me, and the following two from my wife with the camera of her phone. 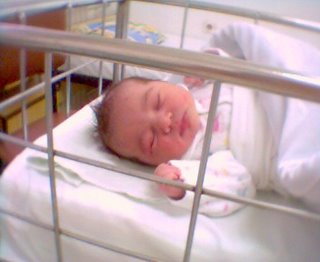 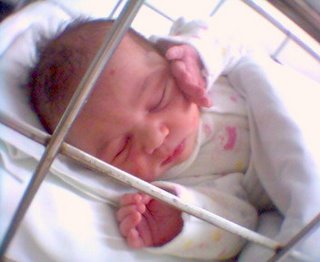 I have created album on Gabriella first pictures on my home server. If you want to view more pictures, please visit it. 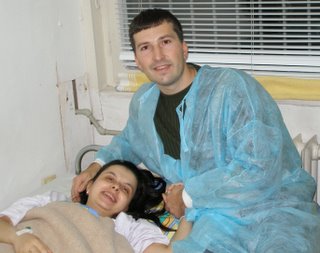 The children and his mother are feeling good and at this moment they are resting in the maternity ward of the "St. Anna" hospital in Mladost (Okravna bolnica).

Yesterday thanks to Ognian Kulev I become part of Mozilla-bg project. As for beginning I'll participate in the project with my translation оf Bugzilla.

Ognian Kulev has posted a news on the project pages.

Today I manage to publish three consecutive news on the Linux-BG site (actually 4, but one never came up live):
It's an achievement, as recently I rarely get the opportunity to work additionally and barely manage to deal with my projects.

From first sight it looks that this are MIME types of images, documents from the office suite of Microsoft and the Macromedia Flash extension. Only that there is no any HTML or XHTML media types.

This prevents showing of my CV directly in HTML format in the browser, because it is available also in PDF, PS, Doc, SXW and ODT formats. Based on the Accept header, that Internet Explorer sends, my content negotiation configured HTTP server sends the .doc file instead of .Html, which is not what I want exactly.

Despite the above said I don't think to change something, because I think that this is an incomplete Accept header and it's not my problem. Besides most of the users of this browser have Microsoft Office package available, so they will not have problem viewing the content ;-)

Adventures with a flat tyre

Yesterday, leaving work I didn't notice in the dark that the front right tyre of my car have go down. I determinate it just when I go up on Tsarigradsko in direction 4-th kilometer. I stopped instantlly and begun the repair, but while taking down the fall tyre was as easy as a child play, taking down the reserve tyre become "mission impossible". After an hour of work in the cold, and different ideas how to go and take a jig-saw from Mr. Bricolage store and cut the hardware that are holding it, I give up. Obviously the screw that holds the tyre under the boot was blocked up with dirt, dust, sand and whatever back tyres have thrown and was unable to move. After consultation with my boss (which also drive a Peugeot) I directed the car slowly on emergency lights to a tyre service on Shipchenski prohod, but when I arived there I determined that the fall tyre is unusable. The tyre service was overwhelmed with clients therefore I start calling familiars with 14'' tyres. One colleague come, so we can try his reserve tyre, but his aluminium wheel rim was unable to fit. So, after almost 3 hours I was able to drag up in Mladost 4 with fall tyre, furiously hungry and collected enaugh cold for the entire winter.

In the morning I go to fetch some cash and after that directly to the Diana service center on the ring-road. I dropped 80 leva for a new tyre and spend one hour there, because all Sofia was decided that this is the most appropriate time for changing the summer tyres (snow was fall just few days before). After that the stupid sofia's taxi 91280 broke my nerves, refusing my taxi order from the ring-raad to Mladost 4 - I was outside (understand not on an address) and therefore not a reliable client. They hang up. I must forget this number, byt the phone of OK Taxi was busy. After I was able to connect and make order, I go back to Mladost 4, changed the tyre and go to work. I arrived in the office as late as 11:30 AM, almost for lunch :-)

I must not forget to bye a foot-pump and to make possble the release of the reserve tyre. 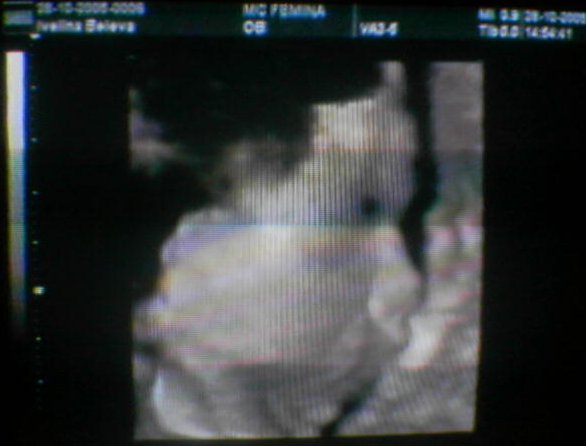 Today me and my wife go to 3D scanner. This allow us to determine that all is going normal as well as reveal the baby's sex.

I'm going to be father

I haven't mentioned yet but me and my wife are waiting our first baby in mid December. However we have lot of work to do since then to welcome the little man in our home.

Yet we don't know the sex of the child, but there are suggestions for a girl. No matter of the sex this excites me so much as I know that my life is going to be changed and I'm looking forward to it.

Today I was at WebTech 2005. I was there mainly to see and listen to Richard Stallman (the philosopher and the founder of GNU Organization ). I can truly say he is an remarkable man. Little careless for his look, but a really free man. His lecture was entitled "Copyright vs. Community in the age of Computer Networks". Although hi spoke for things I was already read or heard it was good to hear it from the men directly and when they are accompanied with his strange sense of humor you get rewarded for being there :-)

The conference at was not very good at all (this was only the first day). Only two other lectures took my attention:

The other two I have heard was the lecture of Robert Ivanov "PHP PEAR" spoken in poor Bulgarian but with presentation in English and the "lecture" of Teodor Kolev "XSLT in .NET" which was equal to a diploma thesis defend. I have expected more.

The organization was not good enough also. About 20 minutes we were in front of the hall and no one tell us what to do. Suddenly someone said that those who are not VIP can freely enter the hall and take place. Why? I also noticed that significant number of the VIP places were not taken. So why then the whole first 7 rows were reserved? I suppose there was not so much "VIP" persons or they are not serious enough. There were people standing and free places. Why?

My general rating of the conference is 5 from 10.

This weekend I have done lot of work on my home server.

First, I reorganized the disk space, so more space to be available on the /home and /var branches. This took me all of Saturday's afternoon since I was very cautious about what I was doing.

Second, I installed new kernel 2.6.10 which replaces the "old" good 2.4.26 kernel :-). This caused me some problems with the modules - some of them didn't load at boot time. I didn't know that in 2.6 series new file /etc/modprobe.conf replaces the /etc/modules.conf file used in 2.4 (and I think 2.2 and 2.0 series also). I have made a copy of /etc/modules.conf and the problem was solved, but it took me 1 hour and some to find it :-). And the all Sunday's afternoon was dedicated to the kernel tuning. In the night I do update on some of my scripts, so they can work with the new kernel.

Pfuuu... After all this I wonder how do I found time to spare with my lovely wife Evelyn :-). I love her and I want to share this with you on this day.

This is my first post to my newly created online blog. I'll try to write on a regular basis in this blog and will share my professional experience and some of my personal life.

More from me you can find on my home server which is not always available online thanks to my ISP and rarely happening power failures.