Last Sunday I decided to try fix my old laptop - a CTX EzBook. Yes, but no... The hardware is old. It was manufactured somewhere in 1997 and the support was ceased somewhere between the middle of 1998 and the beginning of 1999. So the things were only in my hands. 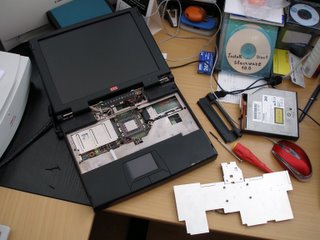 The laptop has several problems both mechanical and with software. The most essential mechanical problem is that the screen doesn't have support. The mounting of the hinges is totally broken (some smart guy made if of plastic...), so the screen is literally hanging attached only on the power and RGB cables. Another problem is that the floppy drive isn't working, and the CD ROM drive is reading only some disks. This doesn't allow for easy installation of software. A bigger problem is that the BIOS-а is old, quite old and doesn't support large hard drives (like for example IBM Travelstar 20GB). The support of such hard drives is provided by a special software, which I'm not sure where I found about 4-5 years ago. This day I also found that I'm not longer able to boot from CD, which otherwise is readable. This makes installation of operating system impossible except for some sort of network installation.
I though how happened so this machine broke up in front of my eyes for about 5 years. I have desktop PC, which is even older (in the sense that I'm using it since long ago) and it works much better then when it was new, but the monitor is another question.
Do you also have such PCs? What you do with them when they become almost completely useless? I wonder if there is someone to whom the whole machine or some of its parts would do some good. Would there be someone who could fix it, because I'm not good with hardware - my strength is elsewhere.

Yesterday coming back from work quite accidentlly I noticed something strange in the prices bilboard of Shell Sofia Sredec. Someone had mixed up something. Look for yourself :-) 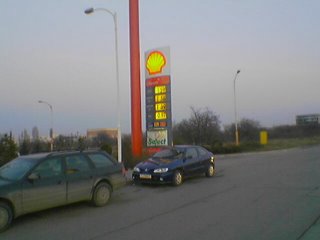 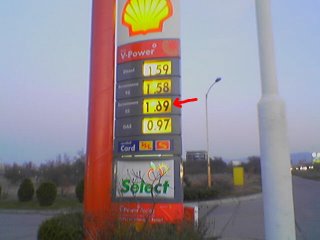